The origin story of Sarah Schneider’s Nolita restaurant, Egg Shop, might be one of the most quintessential New York; the restaurant was born out of Schneider’s love affair with the humble deli egg sandwich. “Egg Shop was sort of a pipe dream of mine,” shared Schneider, who worked in the fashion industry for 10 years before opening the restaurant with her husband. “I was obsessed with egg sandwiches. It was what I could afford when I was 22 and running around New York City.” As Schneider got older, and started caring a bit more about what went into her body, she noticed that there wasn’t a restaurant that specifically catered to the “art of the egg sandwich,” and that’s how Egg Shop was born. “I wanted to be able to create a space that had organic, locally-sourced food with a bunch of different options and, and egg sandwiches were the beginning of that idea. I wanted a menu that had really indulgent options and then also very healthy options.” 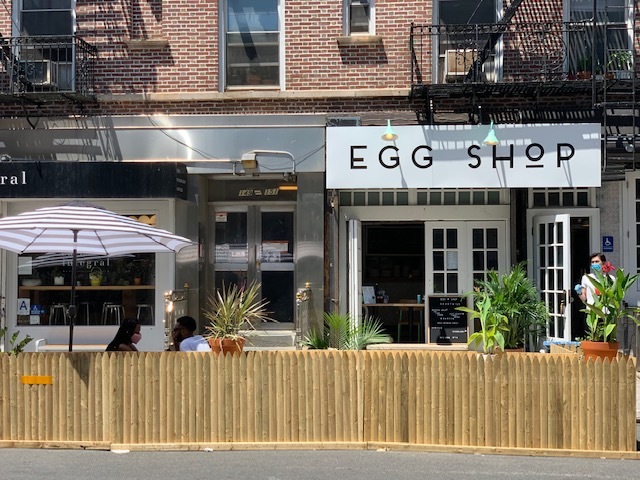 Egg Shop is known for having one of the best spicy chicken sandwiches in the city: the Hot Chix. And like the restaurant, itself, the sandwich was born out of the kitchen’s neighborhood influences. “When we first opened the Nolita location, all of our cooks would go to this banh mi place around the corner, and they were obsessed with this banh mi sandwich. For some reason, we all thought, ‘Ooh, that’d be super good with fried chicken,” said Schneider. They took Egg Shop’s fried chicken, which was previously just a side dish, and collectively developed the Hot Chix.

“It’s a buttermilk brine fried chicken that has a bit of sweetness to it already. So when we add our chili aioli to it, it gives it that heat that we’re talking about. And then I think what’s really special is the pickled carrots, pickled jalapenos and the cucumber that give it a banh mi sort of vibe that everyone loves.” Being Egg Shop, they of course, add a gooey sunny side up egg on top for a decadent, unexpected, treat.

Spicy Chicken Sandwiches saw an increase in popularity across the country this year (299%!), and Schneider has a theory as to why: “While everyone was home doing their part and being in quarantine, everyone was cooking and like getting super into making sourdough bread or just baking. And I think that fried chicken sandwiches are something that you can’t easily make at home. So I think anything that was more of a challenge to make yourself became an exciting thing to be able to order for delivery and take out.”

Ready to put Schneider’s theory to the test and order your own spicy chicken sandwich?